Thriving Through the NICU

Many of us endure countless hardships while trying to master breastfeeding with our newborns. Additionally, some of us even have the added stress of spending time in the neonatal intensive care unit with our babies.

Our son was unfortunately one of the only newborns in our hospital to spend time in the NICU after his birth. Our baby was so small but we were thankful he could breathe and eat on his own. I remember seeing other mothers enjoying their newborns in their own hospital rooms, then leaving after a day or two. They all appeared to be well rested and looked so happy on their way out. I could feel everyone else’s excitement as they left the hospital while I was still shuffling down the hall to deliver my baby his colostrum. I envied them because unlike those mothers, I was separated from my baby and I had no idea when I too would be taking my newborn home.

Me with my newborn baby in the NICU

So there I was, in my hospital bed, pumping around the clock to be sure I could establish my supply while my baby wasn’t able to breastfeed. I set an alarm to go off every 2 or 3 hours as a reminder to pump to be sure I wouldn’t miss a session. I’ll never forget the joy I felt when I saw the colostrum come out of my own two breasts for the first time. I was amazed at what my body could do and was so excited to get it to my baby because I knew how important it was for him, especially as a preemie. My husband also helped me to deliver my small shipments of colostrum and breast milk to our baby down the hall. It must have been quite amusing watching a man deliver bottles of breast milk on a scooter while recovering from ankle surgery.

I spent as much time as I could in the NICU alongside our baby, and then would return to my room in order to eat, shower, pump or take a quick nap. After a day or two, I was relieved when they told me I could bring the pump with me to the NICU. This allowed me to spend even more time with my sweet baby. I could hold him as much as I wanted, attempt to nurse him, and then let daddy cuddle him as I pumped. Looking at my baby while pumping was much more gratifying than the view of my hospital room, and I do believe that all of our skin-to-skin contact (SSC) did help to improve my supply.

“(Skin-to-skin contact) will help stimulate your hormones that help increase milk supply. Mothers who pump after SSC report getting a higher volume pumped than other pumping times.” (1)

The lactation consultants and nurses taught me so much during our stay and I am grateful for having such individualized help and encouragement as a new mother. Even though my baby was too small to nurse and would need months of practice before he could, they still showed me various strategies to help him during each and every feeding. After what felt like billions of failed attempts, I continued to hold my baby close in hopes that SSC would help to work some magic and get us home as soon as possible. Something just felt so right about constantly holding my baby and almost never putting him down.

As helpful and kind as the nurses were, the NICU was not a pleasant place. Hearing the other babies cry made it even harder to stay positive. Being that our hospital is a safe haven for babies, there were one or two left behind and in need of a loving family. I was there in tears because all I wanted was to bring my baby home, meanwhile these babies were there because they had no home.

My husband eventually returned to work and those few days without him were the longest. My baby’s grandparents, aunts, uncle and cousins also spent many hours visiting us and bringing gifts such as preemie clothes, blankets and flowers. One dear friend even brought me dinner one night. Before she came, I thought I looked like a mess and wouldn’t want to see anyone. I was accustomed to my hospital meals and was almost going to ask her not to come. After she left, I was so thankful to be reminded of what a wonderful friend I had.

Despite our many visitors, days felt like weeks in the NICU. Watching my poor baby get pricked with needles for blood work and having sensors taped all over his tiny body crushed me. I wanted to rip everything off of him and just cuddle his fragile little body endlessly. For these reasons I couldn’t help but hold my baby close to me as much as possible. Every minute that I spent outside of the NICU, I felt horrible for leaving my baby alone and not just because I wanted to be with him, but because I knew how much he needed me. We were told he would probably need to stay in the NICU until after his due date passed. This would mean that we would have to spend 5 weeks there, after the additional two days I was admitted prior to my baby’s delivery. I feared this was going to be our life for at least another month.

The worst night was the one I had to spend sleeping on the recliner in the NICU. After getting discharged from my hospital room, I could no longer sleep in the maternity ward and I couldn’t even use the bathrooms there. After drinking small pitchers of water every few hours, I had to exit the NICU to use the lobby bathrooms and then get buzzed back in every time. Exhaustion aside, this was especially painful as I was healing from surgery. I hated being separated from my baby like this; I just wanted him home with me. I didn’t care how many people told me to “take advantage” of having other people care for my baby because I wanted him all to myself. Not only did I want to always keep him in my arms, but I worried that the separation would ruin our chances for breastfeeding. I knew how much my baby needed to be close to his mother.

I finally gave in and listened to the advice. After spending over a week in the hospital, I went home once for a few hours to shower and sleep while my baby was still there. It felt so wrong being so far from him, even if it was only for a few hours. The added stress of worrying about getting back in time to deliver more breast milk by his next feeding was completely unnecessary and would have been avoided if I had just stayed another night on that awful recliner so I could stare at my baby and stay by his side. Even though I knew the nurses were kind and capable of caring for my baby, they weren’t me and I still wish I could have been there more for him. Being with my baby made me feel good and I have finally learned that there is nothing wrong with a mother simply wanting to always be with her newborn.

“SSC can reduce maternal stress and postpartum depression which can occur due to the separation.” (1)

A nurse told me that if I stayed optimistic and acted as if we were going home, it would happen sooner. On the morning of the sixth day in the NICU, I had finally started to dress my baby in his new outfits that were delivered by his many loving relatives. Hours later as I was holding my precious baby, the doctor entered. She told me we were going home. I would have jumped for joy if my bandages and heavy body weren’t weighing me down. I called my husband right away to tell him the good news. He left work early to come pick us up and we finally went home together as a family. I am more than confident that my breast milk along with all of the kangaroo care and SSC my husband and I enjoyed with our son played a major role in getting him home so quickly. Our baby was able to leave 4 weeks sooner than the original estimated date. 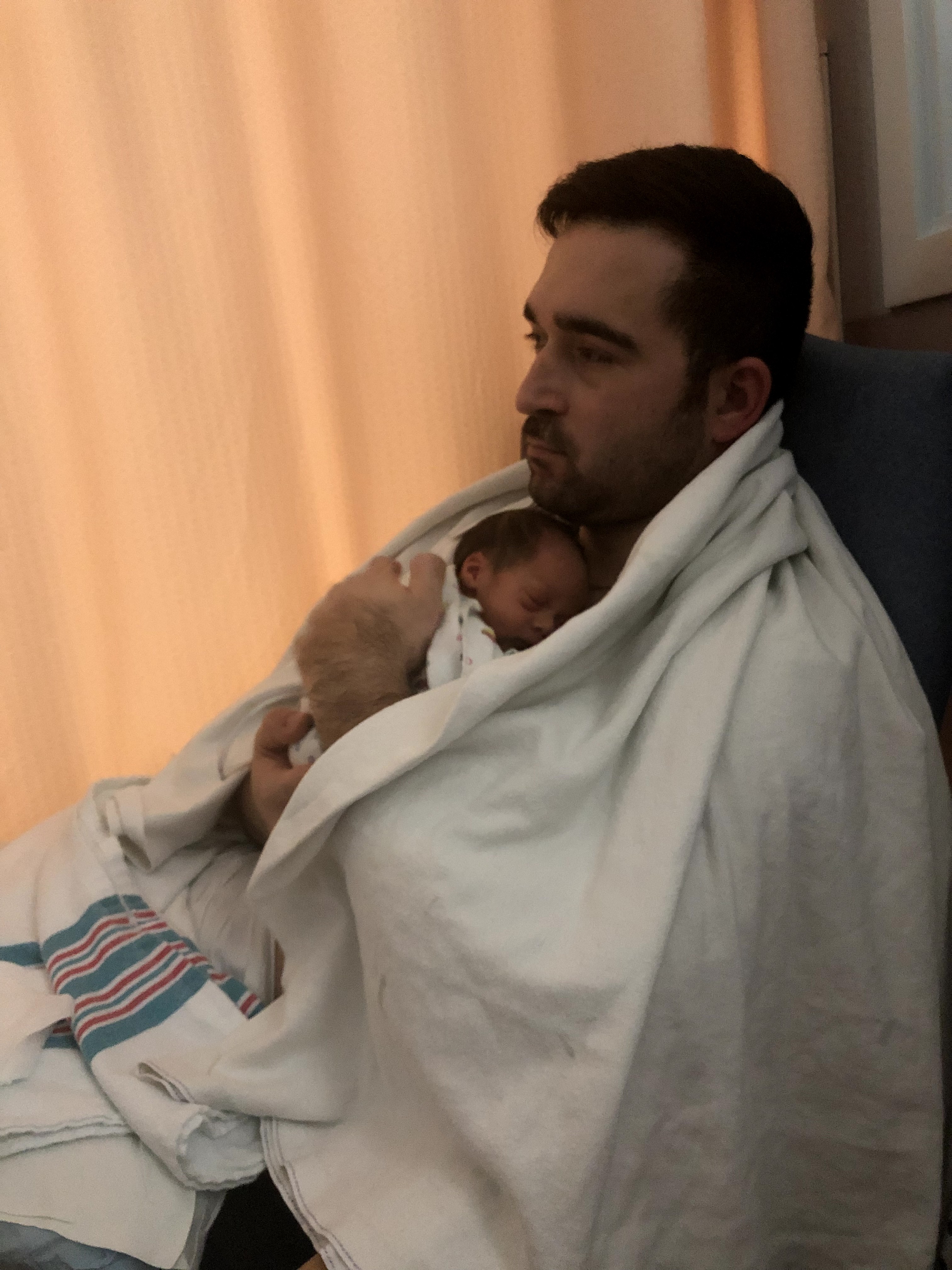 My husband and son practicing SSC

The 10 minute meals, the 2 minute showers and the 1 hour naps were totally worth it in order to spend more time with my baby. I have read plenty of studies emphasizing the importance of kangaroo care (SSC) for bonding and promoting better health for the parents and newborn, but our personal experience proved it all to be true. Although my birthing goals were destroyed the moment I heard I would have a cesarean, I am so glad I was informed about the benefits of SSC with a newborn, especially a preemie. I’ll never know if I could’ve shortened my baby’s stay by not going home that one night, but I do know that holding my baby so close for so long helped him to thrive his way out of the NICU.

My heart goes out to all of the families living temporarily in the NICU. I wish for all the best possible outcomes and send a gentle reminder to cuddle, kiss and breastfeed those babies as much as possible. Skin-to-skin contact is the best thing for parents and a newborn, especially one born prematurely. Although my baby is no longer a newborn, I will continue to cuddle him as long as he will fit in my arms, even if that means forever.